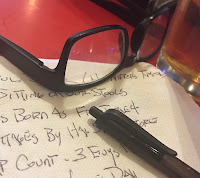 I was thinking the other day (yea, I know thinking, right?) that there is a lot of knowledge, some useful and some not, when a couple of old men sit down and talk over beers.  It could be something as simple as learning something new, and yes that still can happen at 72, or subjects that deal with local politics or government.  This past Friday we celebrated EWD, a little-known annual event that only a few are even mildly aware of, so unknown that even the person celebrated doesn’t know of the day.  Our powers of observation are heightened during these sessions, gathering insightful information, as how many ball caps were being worn by gender in our area of the room.  I’m not sure what was special about last Friday, maybe the unusual fact that the background music had changed to Jazz for the first time ever in that restaurant that I know of, but I grabbed a pen and took notes on a napkin. After all that’s where most great ideas come from, napkins in a bar.   Anyway, we’ll see if this new inspiration brings back regular post, instead of the semi-annual I’ve been doing lately.  More from “Table 4” in coming days.
at April 03, 2022

I was thinking the other day (yea, I know thinking, right?) that there is a lot of knowledge, some useful and some not, when a couple of old...

Jerry Katz
The personal blog of Jerry Katz, my thoughts and opinions! Don’t be a hater!